In today’s world, it is not uncommon for masculinity to be placed on a spectrum, a label-less position on a gradient between two ends. This system allows individuals to establish their own identity, be it simple or complex. However, it is common for those extreme positions to be enforced upon an individual by those holding on to archetypes at either ends of this spectrum. Specific subsets of gay male cultures have rigorous ideals of body and beauty attained through strict diet and exercise and can be isolating for those who don’t measure up.  In the sporting world, homophobia can be used to sublimate the physical intimacy between players, isolating some in a similar manner.  In the digital era of endless and available information we can quickly forget and take for granted what growing up as a member of a closeted society can feel like.  From this closeted place, cultural references from television characters and eroticized fiction can begin to distort perceptions and a new parafiction begins to take shape as a way to express oppressed desires.

Christopher Selleck’s artistic practice interrogates the stereotypes of masculinity and homosexuality in American culture, through photography, sculpture and installation. With images ranging from intimate, seductive, perfectly lit portraits, to pixelated snapshots appropriated from dated sports programming, we can see the extremities of identity become more apparent.  Selleck’s work allows viewers to confront and challenge their own identity and personal history.

Artist Bio:
Christopher Selleck was born in Augusta, GA.  He has spent the last 20+ years working in and around the art scene of Minneapolis area.  He received his BFA in Photography from the University of MN-Twin Cities in 2013 and his MFA in Visual Studies and Photography from the Minneapolis College of Art & Design in 2016.  Using sports and masculinity as a lens to view identity, his various projects of the last few years have focused on this area of identity construction.  His current projects address issues of hyper-masculinity, sexuality and the male body.

His work has always had an affinity for traditional forms of photography but with a more conceptual approach.  Working with film, instant and digital processes his practice has tended to focus on portrait and self-portrait based projects.  Photographic prints and books have been central in his practice, but his work has also incorporated video, sound, installation, printmaking and sculpture.  He has been exhibited and published both Nationally and Regionally.

ABOUT THE RAC EMERGING ARTIST SERIES

Focusing on the development, commissioning, and production of new work by emerging artists from Minnesota, this RAC program has worked directly with more than 50 artists. Since 2004, the organization has had a significant impact on the professionalization of artistic development in the state of Minnesota.

As one of the foremost art centers outside of the Twin Cities, RAC plays a central role in providing access and support to emerging artists while also connecting contemporary art practice with a broader audience.

Artists in our RAC Emerging Artists Program are supported, challenged and facilitated to take risks. By working with our curators, and taking a hands-on approach, selected artists are challenged to rigorously engage with materials, ideas, and the production of art. As an organization, we aim to produce shows with artists that take their practice to another level—aiming to break an artist into a new realm within Minnesota, the region, or even nationally.

We are excited to announce that in our twelfth year, this signature exhibition series is moving from our third floor gallery space to our second floor gallery space, and to reflect this new development, will be renamed the RAC Emerging Artist Series. 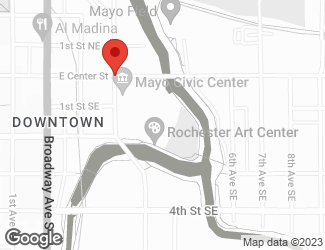